DART BLASTERS TO ALL, AND TO ALL A GOOD NIGHT

This season, we’re here to make your holiday shopping as close to effortless as possible. In fact, if you’ve got foam dart fans on your gift list, all the heavy lifting can be done right from your phone. Read on for a rundown of the best dart blasters Dart Zone has on its digital shelf this year, and keep your holiday shopping as easy as clicking “Add to Cart”. Because let’s not play at modesty — we make dart blasters that would make Santa drool.

FOR FOAM FLINGERS 8 AND UP

Dart Zone has a slew of lightweight, easy-to-wield blasters for kids ages 8 and up. These dart blasters are made for maximum fun and minimal work, so your young dart fans can enjoy the excitement without sacrificing any power.

The Vulcanator combines a sleek silhouette with motorized, cartridge-fed blasting. Power up the flywheels and send the 24 included Dart Zone “Chili” Darts flying up to 80 feet. And with the Vulcanator’s double-cartridge build, players get twice the dart capacity at once. This blaster’s shoulder stock features a universal attachment, so players have the freedom to change up their game with stocks from any other standard dart blaster brand. 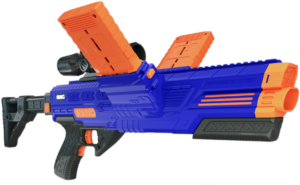 For a dart blaster with super-charged power and ultimate versatility, reach for the Dart Zone Spectrum. This motorized, clip-fed dart blaster features a removable scope and adjustable tactical stock to give players a competitive edge on the field. Choose from multiple configurations for a game tailor-made for your dart-blasting style. The Spectrum utilizes battery power to deliver rapid-fire blasting performance — power up the flywheels and send darts flying up to 80 feet. Featuring an auto-advance, four-dart cylinder, the Blue Blaster is the sharpest choice for a fast-paced, lightweight game that’s packed with action. Load the blaster with a simple pull-back mechanism, then watch darts fly up to 80 feet. The Blue Blaster has the versatility and power for living room showdowns or backyard battles. The Dart Zone Magnum X2 Superdrum Dart Blaster ups the ante with a 40-dart rotating Superdrum. Choose between slam-fire or trigger-fire for a versatile, dynamic dart battle. Featuring an adjustable stock, the Magnum X2 lets you stabilize rapid-fire shots in the heat of action. This blaster has a 40-dart capacity and includes high-performance “Chili” darts, with a blasting distance of up to 90 feet. Snag two quick-load dart blasters in one package, so you can stay two steps ahead of the competition. Each blaster features an auto-advance rotating cylinder for rapid-fire blasting, delivering high-powered performance at a great value. Keep your rivals on their toes in the heat of any dart battle with 6-round, auto-advance rotating cylinders and darts that fly up to 80 feet. And for players who are ready for a bit more power, check out Dart Zone’s slate of blasters built for the pros. These blasters come stocked with the ultimate precision and tactical prowess, for blaster buffs who know how to play the game.

With the Dart Zone Max Dictator, players get flawless power right out of the box. Featuring an easy-access shoulder stock loading mechanism, the Max Dictator makes refilling darts easier than ever. The innovative stick cartridge extender doubles this blaster’s onboard capacity. Own the field with slam-fire technology by holding down the trigger and pumping continuously. With this blaster, players can fling Dart Zone Max “Ruby” darts up to 125 feet. With the Tomcat, players can dominate the competition with a two-layer Superdrum featuring an impressive 50-dart capacity. Half-length Dart Zone Max “Ruby” Darts move into place automatically for speedy blasting, so players never lose time on the field. Even better — with the Tomcat superset, players receive Max Protect eyewear gear for an extra layer of in-game protection. Take the Tomcat to the blaster ring and fling foam darts over 125 feet. This foam blaster continues the legacy of the Dart Zone Pro-Series lineup with the addition of unbeatable cross-compatibility. Find maximum precision, tactical finesse, and the ability to customize for a tailor-made fit. The Dart Zone MK-1.2 introduces a unique flip-stock feature for maximum comfort and customization. No need to remove the stock during gameplay; players can simply flip it to the side and create a shorter blaster without pausing the action. The MK-2.1 pro-series blaster brings all the speed and tactical prowess of its predecessor, with added innovation and a sleek profile. The MK-2.1 allows players to refill their dart-clip from the bottom — no speed loader required. Enjoy the same muzzle-brake advantage you’re used to in a heavier, futuristic-inspired silhouette. Keep this blaster close with the included leg holster, and store stocked-up cartridges in the ultra-efficient belt holster. This bolt-action, pro-level dart blaster delivers unrivaled distance and accuracy, blasting darts over 125 feet per second. The Jurassic Pro Ultimate Dart Blaster shines in versatility with its detachable stock and removable taser attachment. The safety lock, tactical grip, and 2 built-in tactical sights allow for maximum control and precision. Battle in style with the custom graphics and amber-inspired storage canister built into the stock. The Ranger features a 3-round auto-advance cylinder for quick field matches. Use this blaster’s easy pull-down loading feature to add the included 3 Tactical Strike rounds. The compact, lightweight Adventure Force Ranger is a perfectly portable ball blaster, giving players a tactical upper hand. Pick up a blaster with precision and power and enter the field with confidence. For the kids and teens who couldn’t get enough foam dart blaster action this year, Dart Zone has everything you need for the merriest Christmas morning. Pick up a can’t-miss gift from the list above and let the holiday smiles speak for themselves. Dart Zone. #1 darts. Period.